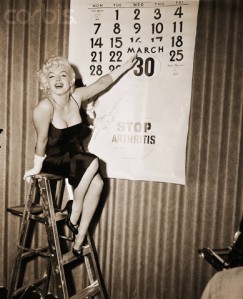 This year is my thirtieth and like the majority of friends the same age, I experienced a crisis of sorts. Actually, the word ‘crisis’ is probably a bit too harsh. It was more of a ‘thorough life evaluation’.

In light of it all, a friend of mine, obviously sadistic, asked me to write a “50 things about me” list. I’m a real sucker for lists, especially of the to-do and top five varieties so I’ve condensed the 50 down to 30 and invite anyone else getting dirty this year to create their own list too. And then link back here. Ok?

1.    I’ve never touched snow.
2.    I love the sound and smell of rain. I think I’m more creative and productive during a proper downpour.
3.    I like cracking my knuckles. I can also crack my neck, back, wrists, knees, ankles, toes and on a good day, one of my pelvic bones.
4.    I used pretend I was a tourist whenever I got lost in Sydney (purely out of shame). It stopped after a lovely chap insisted on walking me to my destination, which involved strolling from the Elizabeth Street side of Hyde Park to a club at the far end of Paddington in broken Engrish character.
5.    A guy I met online once flew from Canada to Australia to meet me.
6.    Instead of perfume, I prefer good quality body creams and lotions.
7.    I’ve had three surprise birthday parties – 18th, 22nd and 25th.
8.    I passed philosophy at university by buying my tutor a lot of beer.
9.    I have a clear police record.
10.    I’ve had sunstroke. It was just in time for NYE 2002.
11.    I broke my arm when I was nine, roller skating. Mum thought I was being a bit of a drama queen so she waited a couple of days before taking me to the doctor. I saw her cry only a few times as a child and that was one of them.
12.    I haven’t broken a leg but wore a cast for two weeks at the age of 14 when I was quite unfortunately misdiagnosed. During school photo week.
13.    I’m named after my Scottish grandmother
14.    I once played mah-jong for three days straight. Yes, mum was involved.
15.    I met my one of my closest friends when I was four. We’ve been good friends since that age.
16.    Even though I’m scared of heights, I’ve been hand gliding and abseiling and quite enjoyed it.
17.    I can speak basic mandarin, but understand more.
18.    I’m terrified of three things: horror movies (overactive imagination), the gym (bores me to tears) and the words “new Australian drama”.
19.    I used to have 17 beauty spots on my face but Mum took me to a lovely Korean “beautician” when I was 19. She replaced them with scars. So kind.
20.    I’m one of those women who found out about pregnancy when it was nearly all over.
21.    I like the fact that all four of the au-pairs Wolf had when he was younger gained between 5-10kgs in a matter of six months due to a fondness for my cooking (all four are German and one had a friend who actually dated a Nazi – they still exist!).
22.    I rarely wear jewellery.
23.    I went through a phase of consistently being mistaken for an Australian Idol. I was eight months pregnant. The Idol wasn’t (and no, it wasn’t Casey Donovan). Despite my reasoning, the “fans” didn’t get it or didn’t care so I signed one t-shirt, two postcards, the back of a receipt and spoke to someone’s brother on the phone.
24.    Mum had me in ‘wife training’ from the age of six. She literally called it that. It involved a stupid amount of cooking and housework.
25.    I generally loathe any of kind “you can do it” hype and would rather smell vomit than hi-five someone, unless they’re under the legal drinking age or we’re taking the piss.
26.    The term ‘yummy mummy’ annoys me. So does ‘super mum’. ‘Single mum’ is up there too, though it’s hard to find a term to replace it. Maybe ‘sole parent’? Too wanky?
27.    I think the notion of a “work/life balance” is a fallacy and only applies to rich people. The rest of us continue with the massive juggling act.
28.    I hate seeing kids on those horrendous dog leashes. Their parents are nearly always bogans.
29.    I’m of the opinion that hearing my dad play the banjo or bagpipes is probably the worst thing you’ll ever hear. Hearing him play either of them drunk is potentially life threatening.
30.    I love toy stores.

This entry was posted in Uncategorized and tagged Me. Bookmark the permalink.